"Motorcycle law is all we do." 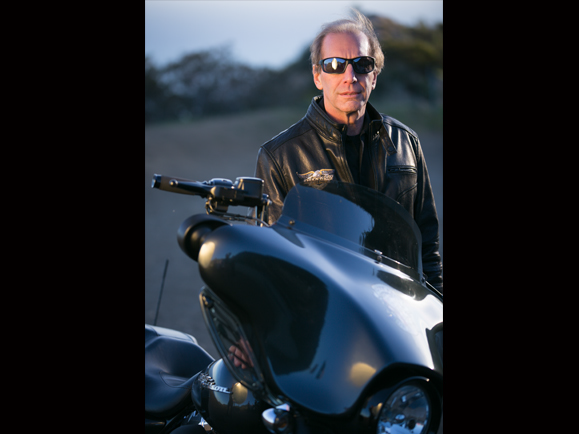 Classic Easyriders – Chuck, what was your first motorcycle?

Chuck Koro – I have several bikes, but my main rides are a Street Glide and an Octane.

CE – What’s your favorite area to ride in California?

CE – What was the influence that inspired you to dedicate your life to serving the motorcycle community?

Chuck Koro – It was a progression. As a lawyer you have many options with respect to practice areas. I was originally a defense lawyer before I realized helping injured consumers was what I wanted to do rather than defending people for insurance companies. Meeting Russ Brown was the endgame for me. Not only would I be helping injured consumers, but I would be exclusively helping the motorcycle community.

CE – Have you ever been in a motorcycle accident?  If yes, what did you learn?

Chuck Koro – I’ve had some spills, but fortunately, nothing serious.

CE – What advice would you give to your fellow riders to help them avoid a motorcycle accident?

Chuck Koro – I’d say to be aware of the most frequent motorcycle accidents. The number one motorcycle accident is the opposing left turn. That’s when a vehicle from the opposite direction makes a left in front of you. This is because the rider is least visible at that angle. Also, it’s hard to judge the rider’s speed. Overlay the common distractions, such as GPS and cell phones and you can see why this is the most frequent accident. You have to be hyper alert when you see a car about to make an opposing left turn.

The second most common accident is the unsafe lane change into the rider, especially when sharing lanes in states that allow it. Typically, it’s best to split the far left lanes. Do not split next to large vehicles such as semi-tractor trailers, buses, or large motor homes. Don’t split when traffic is flowing 40 mph or more. Don’t split more than 10 miles over the flow of traffic. Splitting at night is riskier because a driver changing lanes may not recognize the headlight is a motorcycle because it blends in with the other vehicles. Also, consider getting racing brakes.

And then there’s the obvious — Don’t drink and drive. Control your anger when you encounter a reckless driver. You have a mega disadvantage in a road rage situation. Get through blind spots quickly. Wear proper safety equipment. Get a go-pro or something similar to document the other driver’s movements. Although it could show the rider was at fault, in my opinion, it is a net plus to have the video.

CE – It seems like insurance companies take advantage of injured motorcyclists. Why do you think that is?

Chuck Koro – There are many imitators who claim to be motorcycle attorneys. They buy a bike and call themselves motorcycle attorneys. Some take low ball offers to get their fees quickly. Russ and I were riding long before we were lawyers. Russ Brown Motorcycle Attorneys® is known for not settling a case before it’s time. Also, resist the temptation to use a family friend or relative or a lawyer who practices in many different areas. Motorcycle law is all we do. We are known in the insurance industry for fighting to the end to maximize our client’s recovery. In fact, insurance employees and defense attorneys have sent their friends to us after a motorcycle crash.

Also, be aware of the cyber squatters and imposters. We have seen sophisticated schemes where it looks like you are clicking on Russ Brown Motorcycle Attorneys® but are taken to another website. When (or if) the person realizes this, they are told the lawyer is associated with us.

CE – After calling 911, what do you suggest a fellow rider should do after they have been in a motorcycle accident?

Chuck Koro – Addressing injuries is most important. Think twice before you refuse an ambulance. If no ambulance, go to urgent care after you leave the scene and get checked out. Call the police. The police will get statements, before the other party has time to change their version of the story. Get witness contact information. If it is safe to do so, take photos of the scene and the vehicles involved. Get the other parties’ insurance information, driver’s license, and registration information. Try to remain calm. Do not argue with the police or other party.

Call us as soon as practical. Depending on the accident location, we may want to have our private investigator canvass for surveillance footage and witnesses, and in many crashes, we have our accident reconstruction engineer examine the scene before evidence disappears.

CE – In the biker world, a common question is what motorcycle insurance do I need?

Chuck Koro – The most important insurance for a motorcyclist is uninsured/underinsured motorist coverage. Too many times we can’t get our client a full recovery because the at-fault driver doesn’t have enough insurance. In that case the uninsured motorist coverage will kick in depending on the coverage limits. I recommend at least $100,000; but I would get $250,000 if you can. Also, if you have a sizable loan on your bike, you should get GAP Insurance. If your bike is totaled there may not be enough insurance to cover the market value and the loan. GAP Insurance would take over in that case. Without GAP the motorcyclist may end up paying off the loan even though the bike is gone.

If you have significant assets, you should raise your liability limits on all your vehicles to protect them. People who have extensive assets should have an umbrella policy which is sold in increments of $1,000,000. They are relatively inexpensive for the amount of coverage.

CE – Why is your law firm the best legal representative for a motorcycle accident victim?

Chuck Koro – Because we’ve been doing motorcycle law only for almost 50 years and have more experience and resources than any other attorney practicing in this field. We have a long-time working relationship with many experts including accident reconstructionists, trucking experts, biomechanical engineers, medical experts, vocational rehabilitationists, life care planners, economists, toxicologists and the list goes on. We will not hesitate to use them when warranted to maximize our client’s recovery.

Most firms are general practice firms and motorcycle accidents is not their expertise, including those that market themselves as motorcycle specialists. Also, like most personal injury firms, if we don’t recover for the client, which is extremely rare if we retain the case, the client does not owe us anything.

CE – Can you describe what it is like to be the head of one of the most active sponsors in the entire motorcycle industry?

Chuck Koro – We pride ourselves on being more than motorcycle attorneys. Sure, we help injured riders get medical treatment, and just compensation. But it’s great to be part of the motorcycle community in other ways. We give free legal advice every day. Our BAM program helps stranded riders regularly. We help clubs with special events regularly. We sponsor motorcycle events across the country including City of Sturgis Motorcycle Rally, Daytona Bike Week, Born Free, Lone Star Rally and a host of Veteran’s events, including West Coast Thunder, Veteran’s Charity Ride, Injured Warrior Appreciation Ride (IWAR), Salute to American Veterans rally, Ride to the Flags, etc. We give millions to the motorcycle community every year. But it’s a two-way street and we appreciate the support we get from the motorcycle community for allowing us to become their partner.